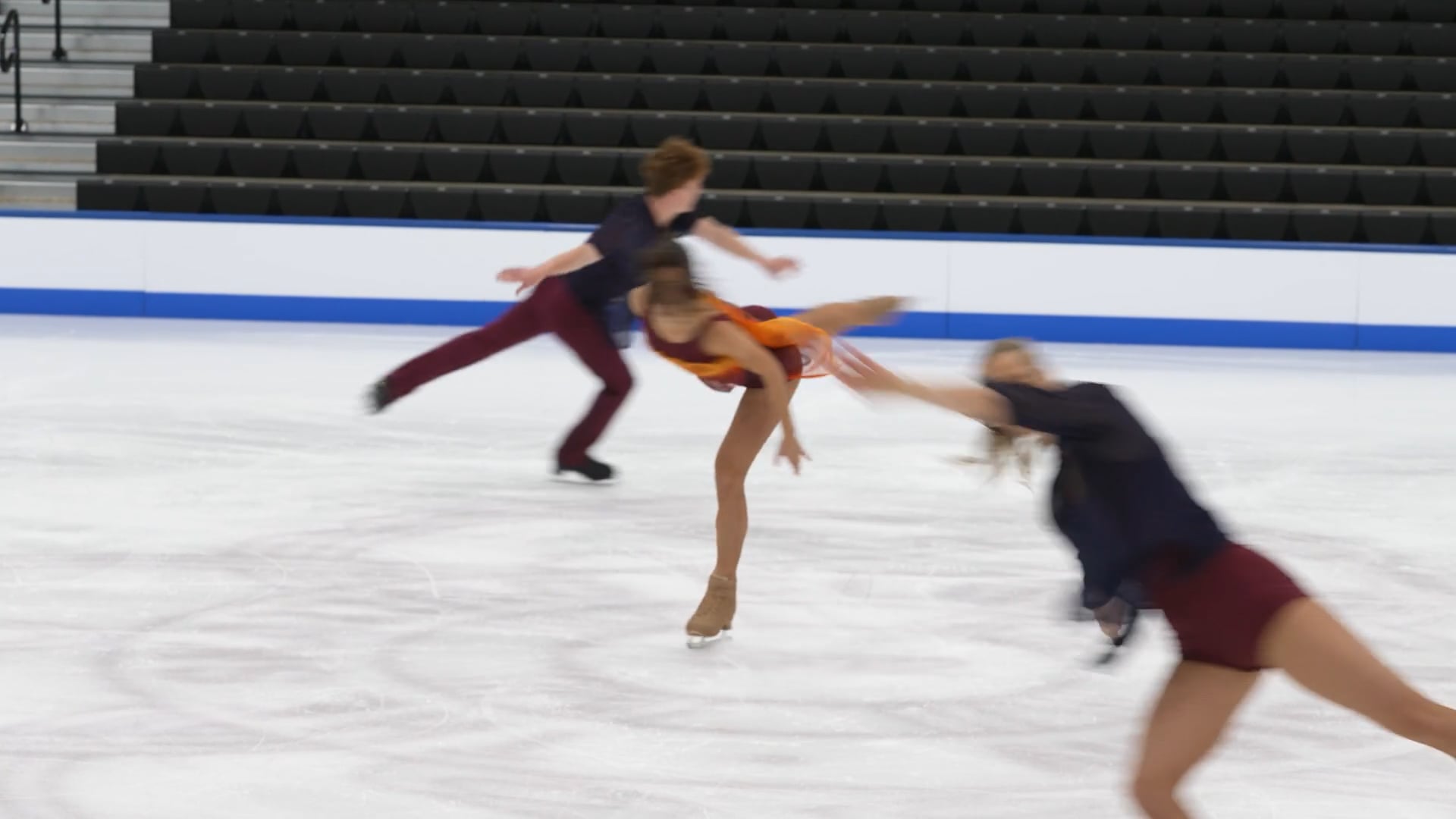 WHERE SKATING IS ART!

WHERE SKATING IS ART!

Vote for your favorite SSWTS contestant!

There's much to see here. So, take your time, look around, and learn all there is to know about us. We hope you enjoy our site and take a moment to reach out and say hello!

By Karen Campbell
It’s all part of the mission to bring the  artistry of ice dance more into the public eye. “The opportunity to tour  is helping us build a bridge from sport to art,” says IDI founding  artistic director Douglas Webster. “I just want people to see and feel  the beauty of skating.

It’s about getting it to audiences everywhere.”

· “One stellar performance! Emotional and stirring! A massive hit!”

· “Sold out! [A] historic performance in Boston”

· “[Douglas Webster’s choreography], combines expansive, rink-spanning movement with intimate interaction, as dancers fan out and then zoom into interlocked pairs.

· “The ice dancers filled the entire rink with exultant, ecstatic movement, forming circles that, as they expanded in size, evoked the sun

To learn more about the IDI company during the winter of the pandemic, watch this special feature from NH Chronicle that aired February 4th, 2021.

IDI is dedicated to hiring diverse talent and teachers and ensuring that we treat everyone with respect and support within this organization. We embrace diversity and strive to create programs that provide everyone with an equal opportunity to thrive and enjoy dance on ice and the joy of flight and flow regardless of race, ethnicity, age, gender, religion, sexual orientation, gender identity, gender expression, disability, economic status and other diverse backgrounds. We aim to create a safe and inclusive space for all.

Established in 2014 as a non-profit organization and based in Kittery, Maine, IDI has built its local, US and global image through live and virtual performances and its educational programs. IDI exists to showcase and promote ice dancing as an internationally recognized performing art form. With a professional company and board of directors of figure skaters and choreographers including World, Olympic and National champions, IDI brings ice dance performances of the highest caliber to communities across the United States. The company has performed  93 times in the United States, offered 60 skating clinics (many for free) and organized free community engagement programming for nearly 55,000 constituents. Further outreach activities include panel discussions, performances at venues such as Jacob’s Pillow Dance Festival, Aspen Gay Ski Week, WGBH’s Open Studio, Rockefeller Center, and Fenway Park and the creation of two one-hour public television specials that aired prime time on PBS stations nationwide and were presented by American Public Television. IDI works to further the development of skating as a performing art with its skating school ‘Skate 360’, and Artistry of Skating clinics, endorsed by US Figure Skating and the Professional Skaters Association. IDI has been featured in The New York Times and Boston Globe critics picks, Dance Magazine, Dance Informa, Dance International and The Dance Enthusiast; and locally on NH Chronicle and 207 Maine. IDI’s national tour was shut down in March of 2020 due to the pandemic, and IDI rebounded In January 2021, premiering two new works that were performed in pop ups in outdoor venues across New England, many were live streamed to audiences across the globe. Solstice was filmed outdoors and will be released during our Free Virtual Gala on October 28, 2021 at 8:30pm EST.

Upcoming activities include a Stowe, VT residency 9/13-18, live performances in Stowe and Dover Arena in Dover, NH, the premier of IDI’s SOLSTICE, part of IDI’s film series, and the launch of IDI’s educational programs on social media platforms.

IDI will once again be the company in residence at Strawbery Banke Museum beginning in December 2021 with the return of our beloved vintage skaters. Our professional company will reside January-March 2022 with pop ups and school programs across New England and the return of our 3rd annual Seacoast Skating With the Stars on February 5th 2022.

The local work will be followed by our 3rd national tour in March/April 2022.

Make sure to follow us on social media and stay up to date on all IDI events and send us an email to join our mailing list.

Sign up to hear from us about specials, sales, and events.

Your 100% tax deductible contribution will enable us to meet our goals and help us share the joy of ice dance with the world.
IDI is a 501 (c)3 organization.

Ice Dance International Brings Ballet To The Ice on Wgbh

IDI Founders, Board of Directors and Staff

Not shown in photo:

Prior to founding Ice Dance International in 2014, Webster served as the artistic director of Ice Theatre of New York, leading the company on two national tours. During his 23 year history with ITNY, Douglas created over 30 pieces of repertory and also collaborated with significant choreographers from the world of dance. From 2003-2012 he worked on choreography teams for skating companies, including Disney on Ice, Holiday on Ice, Stars on Ice, The Autostadt, and the Sun Valley Ice Show. His choreography has been seen in television shows including Winter Solstice on Ice in Finland, Skating with the Stars for ABC TV, and Sterren Dansen op Het IJs in The Netherlands. From 2014-16 Douglas served as the Creative Director for a Disson Skating/ABC television series called “Shall We Dance on Ice,” a show that paired a cast of champion ice dancers, including Olympic Champions Meryl Davis and Charlie White, with world class ballroom dancers from  Dancing with the Stars. The shows were taped in front of a live audience. Many skating celebrities have skated Webster’s work including Olympic Champion Sarah Hughes, Sasha Cohen, Ryan Bradley, Alissa Czisny, Lucinda Ruh, Lu Chen, Elena Leonova and Andrei Khvalko, Sinead and john Kerr, Keegan Messing, and Kim Navarro and Brent Bommentre.

As an educator, Webster served as the founding artistic director of the Salt Lake City Sports Complex when it was built for the Olympics. Recently, he has been staff for US Figure Skating’s Dance Camp, High Performance Camp, Synchro Summit, and Components Camp; a guest on PSA’s webinar panel on interpretation; and staff for ‘Grassroots to Champions’ national clinics. In 2020 he ran IDI’s first virtual Skate 360 school that was endorsed by the PSA. He has judged many of the Young Artist Showcase Finals and continues to serve as judge in the exciting new series presented by American ice Theater. Webster has been nominated for both Professional Skaters Association Awards, the Paul McGrath (twice) and the F. Ritter Shumway. Douglas has judged the PSA’s US Open twice in 2019 and 2021. Webster also serves as the Founding Artistic Director of Labrie Family Skate at Puddle Dock Pond in Portsmouth, NH.

Check out this video featuring Edward and Linda Villella and Douglas Webster speaking about IDI with footage of our repertory at our 2016 Sun Valley Residency.

Shot and edited by Mark Oliver

IDI Residencies serve to create, teach, and engage with the community. Our company edge class is free, and along with our community outreach programs,  we aim to share the joy, the flight, and the flow of skating.

IDI strives to give back when in residency, on tour, or during special IDI events. We partner with Higher Ground Sun Valley, Future in Sight and the Little Harbour School in Portsmouth, NH. Company member Carly Donowick says "these programs remind of her of why she fell in love with skating in the first place!"

Reach out to Douglas at Info@IceDanceInternational.org for more information about booking an

Commission us for one off events that inspire the joy of skating and bring your community together!

Celebrate the joy and history of skating with IDI, our Founders, and our Board of Directors

Support IDI by bringing us to perform at  corporate functions, galas, and parties that require that "WOW" factor!